The legend of Ancient Tea Horse Route started from the most prosperous period in Tang and Song Dynasty, prosperousity extended in Ming and Qing Dynasty and reached its peak after the establishment of Republic.

The Ancient Tea Horse Routes are divided in three routes: 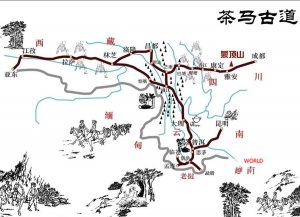 These routes connect Sichuan, Yunnan and Tibet, further extended to Nipol, India, Bhudan, Sikkim, Laos. Its purpose went beyond a simple trade route, but a bridge to connect cultures and to exchange religions and humane values. The water transportation was almost impossible due to extreme difficult terrain, transportation by horse became the best solution. It is not exaggerate to describe the Ancient Tea Horse Routes as a legend of flesh, blood and lives.

The construction of modern highways has significantly improved the unresearchable traffic problem, the traditional memory of ancient horse transporters travelled with tents, shabu-shabu and guns gradually faded away. The Ancient Tea Horse Routes today remains as the most mysterious and spectacular natural scenery in the world where contains endless astonishing and breath-taking cultural and natural heritage .

The Ancient Tea Horse Routes itself is culture that we can’t use describe with words for its magnificent beauty, the marvelous epic legend shound’t be forgotten.

Hope it’s not yet too late