OMG, What a crime!

The responsible person who takes care and have rights to harvest tea picking from the >500 years old GuShu （ancient tea tree）in  WuDong Shan village, for FengHuang DanCong, went to check that growing status, she was shocked by the destroying of some branches.

This crime has been reported and now is handled by the police in FengHuang Mountain Range. Hope they can catch the responsible criminals and punish them severely.

Please don’t even try to think or speak about human rights, because those who.committed such crime don’t deserve any right.

Received a surprised #teasample parcel from #guangdong today, there are 3 different quality grades of #fenghuang #dancong and 2 quality grades in #blacktea.

It is delightful to enjoy the spirit from old tea trees.

#flavours and #tastes subject to #individual #preferences #individualpreferences
but there are fundamental #differences between #naturalflavors vs. #aromaticflavors 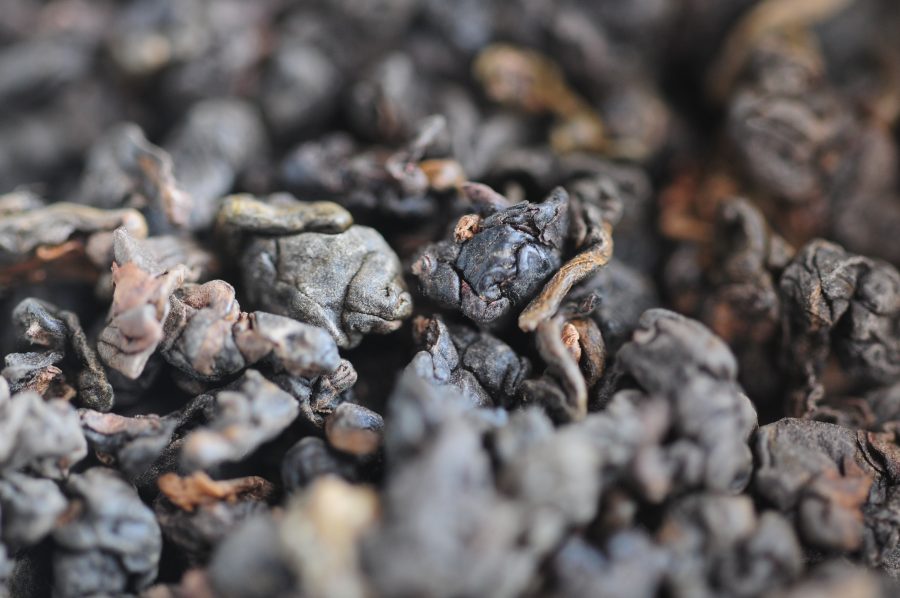 Oolong is an unique tea type which is also known as ‘Qing Cha青茶” in Chinese , inFrench they translate “Qing” to “bleu”, therefore in Europe, some people know it as “thé bleu”. But if you search the color definition of “Qing 青” on Google, then you will get series of color from green to blue.  Instead of “Blue-Bleu”, the color definition of “Cyan” would be more close to the color of Oolong.

“Qing 青” also implies the meaning of life, also is the symbol of “Spring” in Chinese culture.
Comparing with other tea types, Oolong is the youngest in the tea family but it has the most sophisticated requirements from tea tree cultivars, oxidation, fermentation and roasting processes.
Actually the color of Oolong has nothing to do with “Blue – Bleu”.  The color of dried leaves shoul be Olive green to dark olive green or even dark grey green  and the color of tea lique is from yellowish amber to rich amber, subject to the level of fermentation and with or without wood-fire roasting.   Multiple layers of flavours and taste, especially the after-taste somewhat driness reaction and stimulate of lymph secretion, are something unique that we should expect from good quality of Oolong tea.
Whether you call it Oolong or Thé Bleu, it is important to recognize that
But is it ‘half fermentation’ already mean it is an Oolong? The answer leaves to those who know which type of tea tree cultivars and type of flavours and tastes to expect from various Oolong teas. 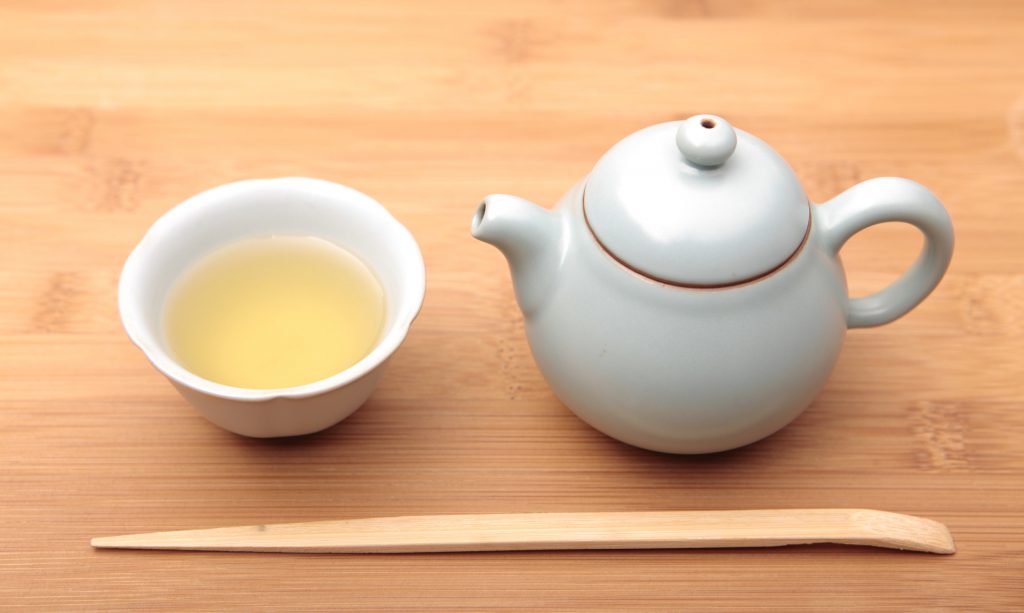 In a Gongfu Cha group one who worries about caffeine consumption asked what to do with Gongfu style in the late evening.

I am too very sensitive with caffeine especially with coffee, but seldom suffer this problem when enjoying Chinese traditional brewing tea late in the evening There are three basic things that I would like to share with.you to consider to clarify this question:

I can make a list for traditional Oolong that offer us various unique flavours and taste and after taste, but bitterness definitely shouldn’t be one on the list if you have good pure quality and breq it right. Besides, you always have time to enjoy a quality tea time.

what in the name of Dong Ding Oolong is not knowing how to distinguish:

3. Effect from global warming and the acidic environment issue

4. The influence from tea production processes

Here is a taste comparing report from

1. Tea sample from a Belgian who brought back from Lugu, Taiwan this summer

2. One Dong Ding oolong collection from our centre 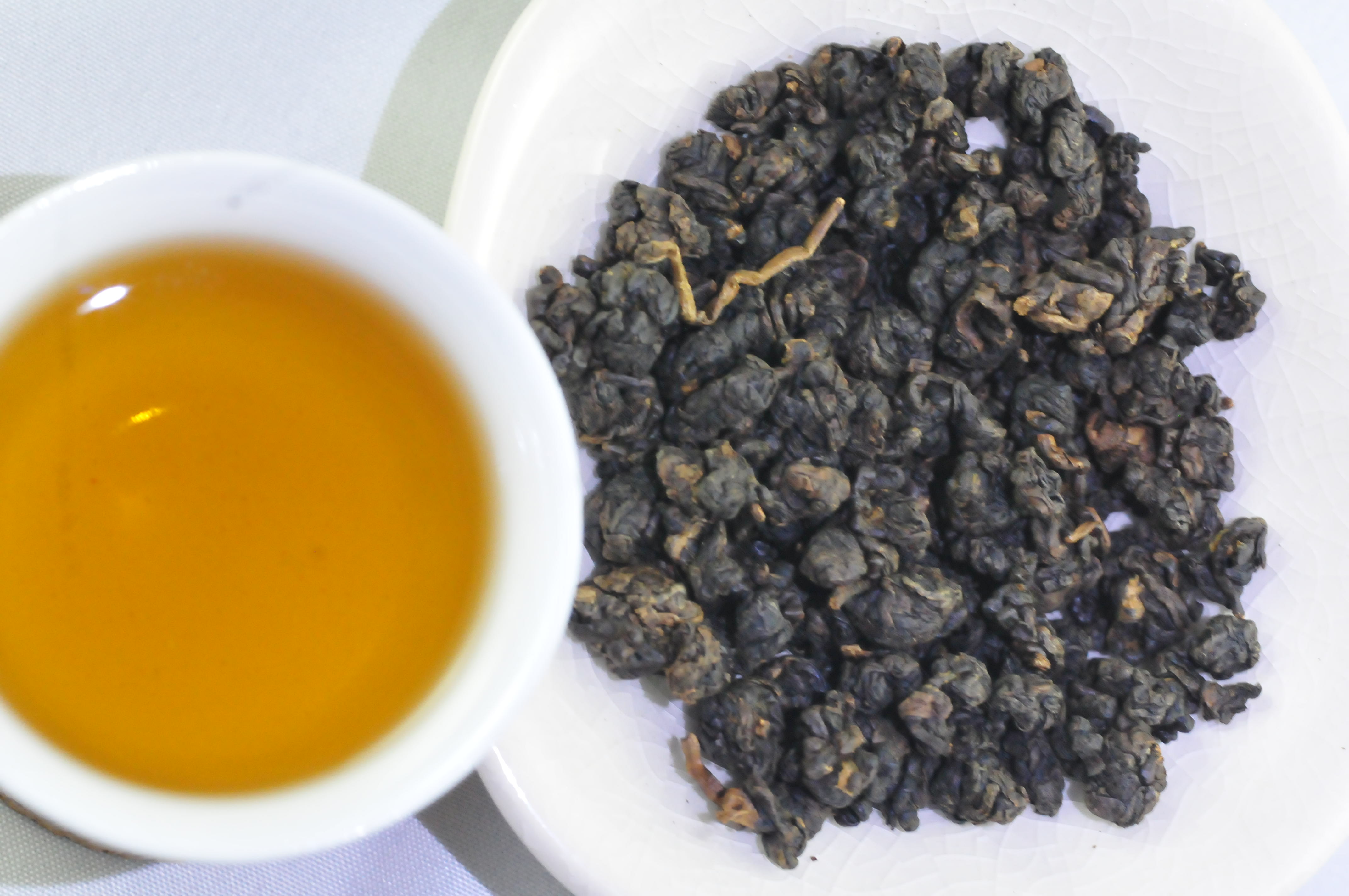 The pinyin for 烏龍 in English can be either Wu Long or Oolong. But in Chinese there is one spelling that is 烏龍 and if you used the standard hàn yǔ pīn yīn, you will get wū lóng.
If you really want to know why there is a Pin Yin difference in English, then probably you should try to study the history of how the earliest Thomas Francis Wade, a British diplomat and sinologist, who produced the first Chinese textbook in English in 1867, which has further been amended, extended and converted into the Wade-Giles romanization system for Mandarin Chinese by Herbert Giles in 1892. The Wade–Giles Pin Yin is still used in Taiwan The Hanyu pinyin system that commonly used today was approved in Mainland China in 1958.
For foreigners who want to learn Chinese might come across with the English spelling either from the earlier Wad-Giles pinyin or from the modern Hanyu pinyin. There is no need to argue which pinyin in English is more correct, the critical point is can you make the spelling correctly in Chinese that Chinese people can understand. 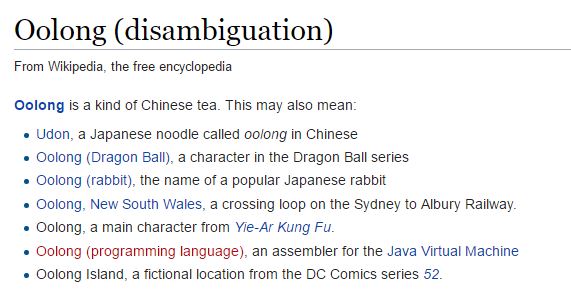 It does not matter which pinyin you use in English, either Oolong or Wu Long, these all meant for one thing, 烏龍 (wū lóng) in Chinese. No matter what “Dark Dragon” is a wrong translation ^_^.
When you learn tea, you will and have to learn Chinese; intonation isn’t that difficult if you could sing.
There are some confusing English pinyin for same type of tea in Chinese.  With tea we learn the essence of purity and authenticity, so I personally like to keep the Chinese spelling.   For example, Feng Huang Dan Cong 鳳凰單叢 remains as Feng Huang Dan Cong unless the mountain region is named by the China government as “Pheonix Mountain”.
For the same thing, Lung Jing 龍井 should remain as Lung Jing; if you use the English pinyin as Dragon Well, then how are you going to translate the best water for Lung Jing in Hangzhou, hǔ pào quán ? to “Tiger takes a bath in fountain”? It would be very weird to translate the sentence of brewing Lung Jing with the water from hǔ pào quán to “Brewing Dragon Well with the water from Tiger takes a bath in fountain“, right?
Don’t worry and be happy. Have a cup of tea.

Why batanical tea garden is unique 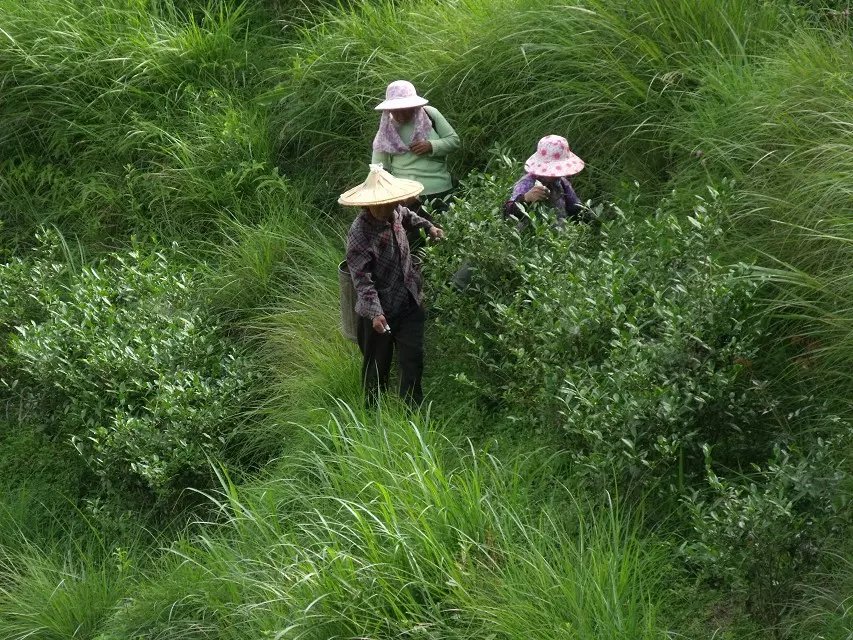 he wants and he drinks only clean and pure quality tea.

KP and I both have passion to preserve the traditional wisdom and techniques.  Often people asked us why the traditional fermented/roasted processed Oolong? Simple, because

it is more gentle to the stomach and it tastes good.

Because KP only picks once a year in the spring time, therefore, the annual outputs are very limited.  For example, the output for Mei Zhan Oolong was less than 15 kgs in 2017 because of the warm winter.
Do you want to enjoy this pure and authentic organic quality traditional Oolong? Please contact us directly by email : info@teasommelier.be 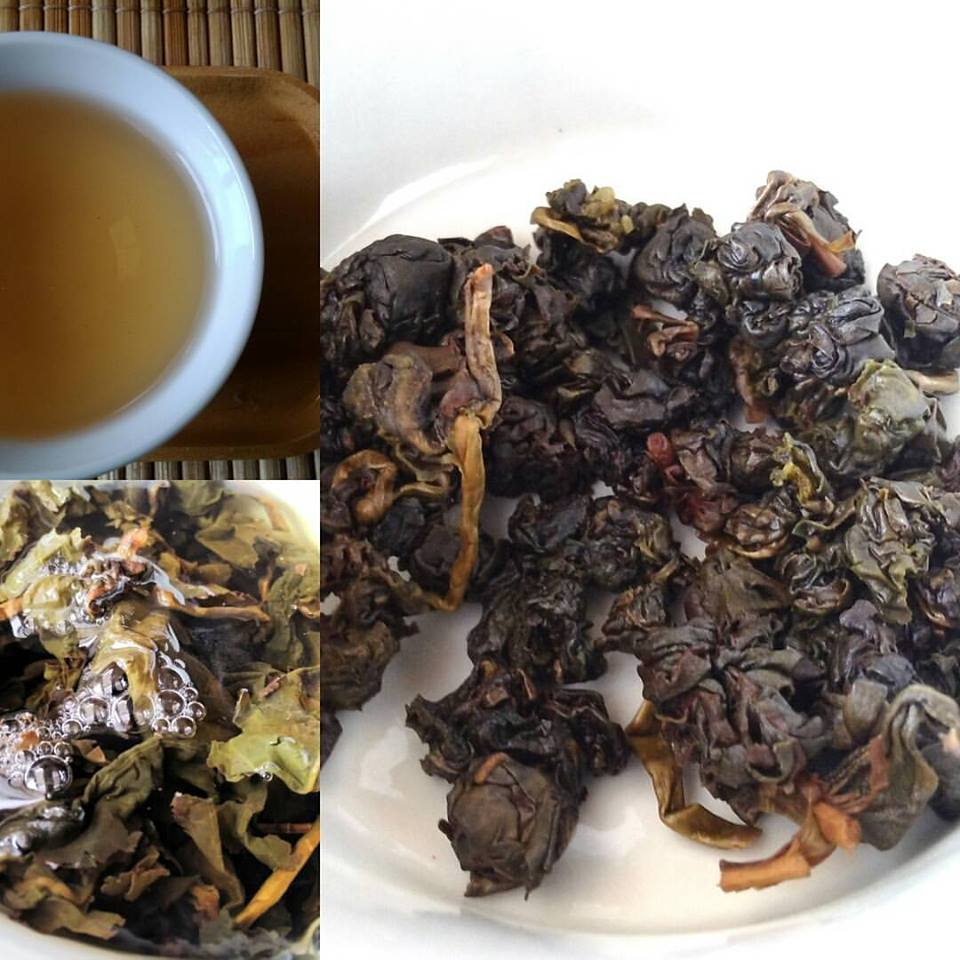 A sleeping beauty is awakened

Often people asked me the question of how long can they store the tea, here is one example of a pack Jade Oolong that I have stored it more than 15 years.
When it’s young and fresh, this Jade Oolong charms you with refreshing and sexy flora flavor as a young and beautiful girl.  After the beauty being slept for 15 years , the original young and sexy flavor has calmed down. But once it’s being lightly roasted and awakened in warm water, the flavor is once again flourished.
Instead of young and refreshing flavor, it surprises you with charming combination of smooth flora and sweet nuts flavors. The taste is soft and smooth with long lasting after taste.

Well processed Oolong can also be stored for long time with the following basic requirements: 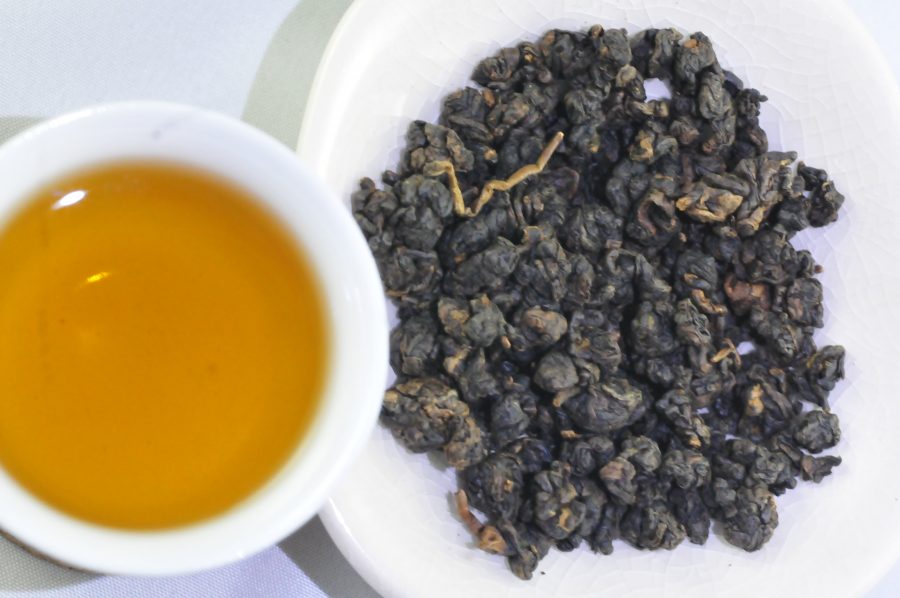 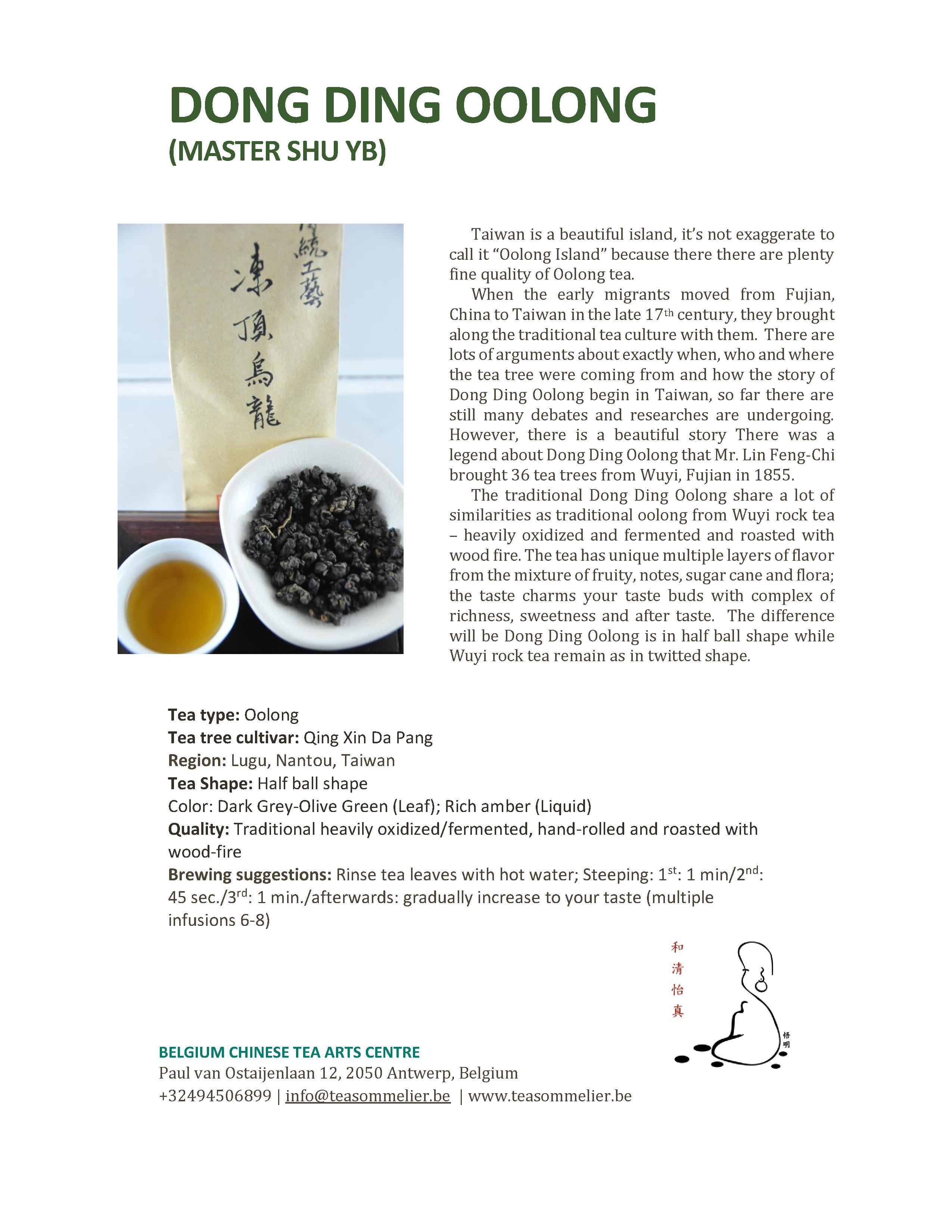